California Vehicle Code Section 23152(f) makes it unlawful to drive a motor vehicle while under the influence "of any drug."  Call Berglund Law Office, P.C. today at (877) 203-4377 or submit our online CONTACT form to speak with an experienced Los Angeles DUI Lawyer if you were arrested because you were allegedly driving under the influence of marijuana, which is considered a "drug" for purposes of California DUI law.  With legalization of recreational marijuana use taking effect on January 1, 2018, law enforcement are on heightened alert for drivers that may be "high."  Preliminary numbers show an increase in marijuana DUI arrests since the new law. 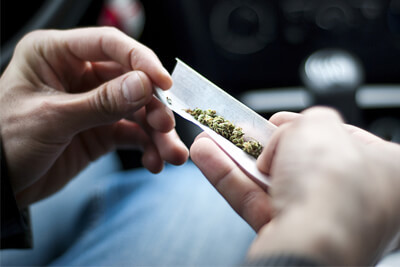 EVIDENCE AGAINST YOU IN DUI MARIJUANA CASES

Unlike California's DUI laws regarding alcohol, which presume that your ability to drive is impaired if you have a BAC of .08 or greater, there is no "per se" THC amount that automatically presumes that you are DUI.  THC is the active ingredient in marijuana.  However, if a police officer believes that your mental abilities are impaired and that you cannot drive with the same caution of a sober person using ordinary care under similar circumstances, you will be arrested for DUI.

If a driver is detained on suspicion of marijuana DUI, the police officer will initially conduct a DUI investigation similar to that used investigating an alcohol DUI and conduct field sobriety tests (FST) to determine if the driver is impaired. There are several standardized FST's that are used during a DUI investigation, the most common being the Horizontal Gaze Nystagmus (HGN), the Walk-and-Turn (WAT), and the One-Leg Stand (OLS) tests.  Visit our field sobriety tests page for a detailed discussion of FST's.

After conducting these tests, if the police officer believes that the person has been using marijuana, instead of alcohol, or in addition to alcohol, the officer will likely request a Drug Recognition Expert (DRE) to assist with the DUI investigation. The DRE is trained to look for specific signs that a driver is under the influence of marijuana or other drugs, including dilated pupils, bloodshot eyes, rapid breathing, rapid heart rate, a dry "cotton" mouth, discolored tongue, lack of focus or inability to concentrate, and a slow reaction time. If you do poorly on the FST's, were driving erratically, were involved in an accident, or the DRE believes you have displayed signs that you are under the influence of marijuana, you will be arrested for DUI and required to submit to a blood test. This is mandated by California's "implied consent law."

As a result of the United States Supreme Court decision in the Birchfield v. North Dakota case, law enforcement officers cannot inform a person arrested on suspicion of DUI that they will face criminal penalties if they choose not to take a blood test.  However, if a driver does not agree to take the test the police can still get a warrant to forcibly take your blood.  It will be deemed a "refusal" which will result in a minimum one year drivers' license suspension, and longer if the driver has prior DUI convictions.

There are a number of problems with tests to determine if a driver is under the influence of marijuana.  Foremost, the medical community cannot agree as to what percentage of THC in your system affects your ability to drive safely.  Alcohol has a "per se" limit of .08 percent, which means that if your post arrest chemical test result is .08 BAC or greater it is presumed that your ability to drive is impaired.  There is no "per se" limit for marijuana under California law.  The Auto Club has concluded that "Legal limits, also known as per se limits for marijuana driving are arbitrary and unsupported by evidence."

Additionally, THC can be detected in your system for up to 12 hours after consumption, possibly longer in regular marijuana users, well after the effects have worn off and would no longer affect your ability to drive.  Studies show that first time smokers usually test positive for marijuana for 5 to 8 days after using.  Smokers that get high 5 to 6 times a week will test positive for over a month after smoking.  This is significant in DUI cases.  A person placed under arrest for suspicion of driving under the influence of marijuana may not have consumed any marijuana at all, e.g., they were not "high" at the time of driving, however the blood result comes back positive for THC because they smoked a few days earlier.  The person in this situation will need a good Los Angeles DUI Lawyer to beat the unfounded DUI charges that have been brought against him or her.  Call Berglund Law Office, P.C. at (877) 203-4377 or submit our CONTACT form today if you have been charged with a DUI involving marijuana.

Law enforcement officers across California are becoming better trained to recognize objective symptoms of drug impairment.  Multiple studies have been conducted to support the position that drug impaired drivers are dangerous.  For example, one Australian study found that drivers positive for psychotropic drugs (such as Xanax, Zoloft, and Zelexa) were significantly more likely to be culpable than drug free drivers.  The same study also found that drivers with blood THC concentrations of 5 ng/ml or higher caused more motor vehicle accidents than sober drivers.  It also found and that drivers with combined blood THC concentrations of 5 ng/ml or higher and a blood alcohol content of .05 or greater caused more accidents that those with only a BAC of .05 or greater.

CONSULTATION WITH AN EXPERIENCED DUI LAWYER

Nevertheless, marijuana DUI cases remain difficult for the prosecution to prove.  Studies have shown frequent marijuana users may show fewer behavioral signs of disruption during intoxication than infrequent users and develop a tolerance to the impairing effects of THC on neurocognitive task performance.  A good DUI Lawyer knows how to use these studies to help your case in both negotiations with the prosecutor and in trial.  Do not assume you are guilty because you have been arrested for marijuana DUI in Los Angeles.  If you have been arrested for DUI speak to a lawyer today and call Berglund Law Office, P.C. at (877) 203-4377 or fill out the form on our CONTACT page for a free and confidential consultation.  DUI Attorney Robert D. Berglund will personally speak with you about the facts of your case.  Do not go to Court alone not understanding your legal rights.  CONTACT a good Los Angeles DUI Lawyer today.

Thank you for contacting us. We will get back to you shortly.

Please complete all required fields below.

You Are Not Alone

Facing DUI charges is an unpleasant experience. We are here for our clients through every step of the process and will make sure that you receive the best representation possible. You will always be able to reach us when you have questions about your case. You can be assured that we will fight to obtain the best possible outcome.

There is no charge for the DUI phone consultation. We want to hear everything that happened both before and after you were arrested. Attorney Robert D. Berglund will personally speak with you about your case and provide you with an honest analysis. Contact us today.